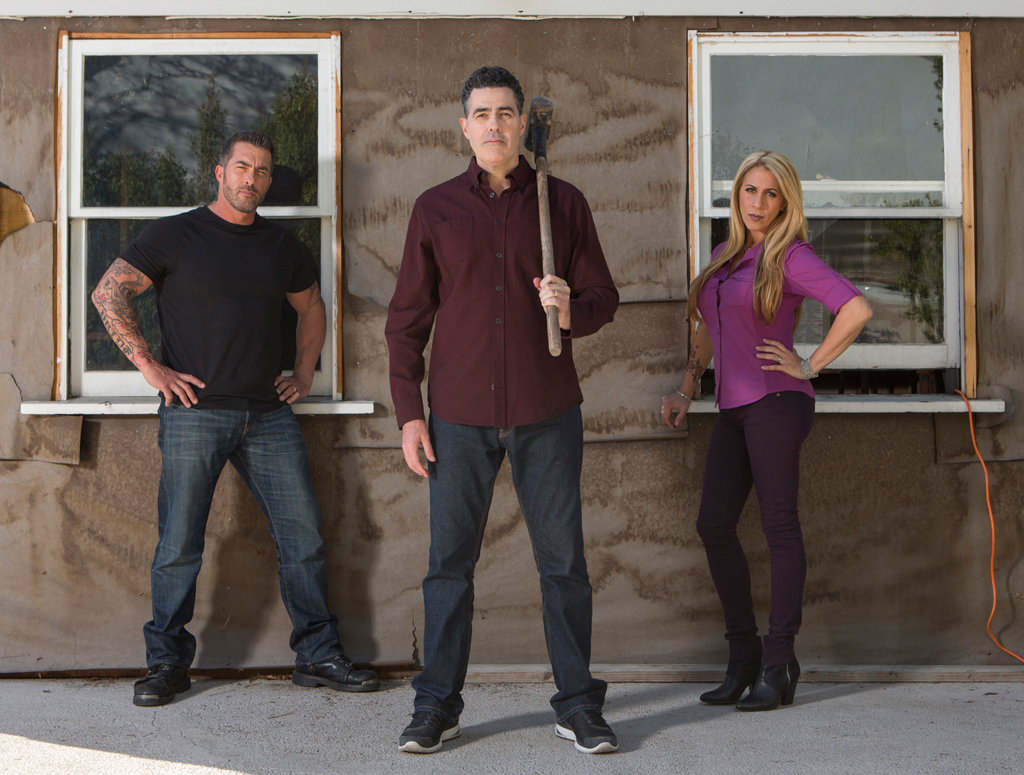 Now in its third season, Spike’s Catch A Contractor is addictive television. Audiences are getting sucked in by watching these dishonest tradesmen be held accountable, thanks to the hard work of a crack team led by Adam Carolla, Skip Bedell and Alison Bedell. But this isn’t just reality TV: Skip really is a licensed contractor, and Alison really is in law enforcement, and they really care about putting the bad guys in their place. LA Fan Cultures Examiner spoke to them last week to get to know these working class heroes a little better.

“When they came to us with the show, it seemed like a perfect match,” said Skip, who’s still working on other people’s homes when they’re not filming. Likewise, Alison is a law enforcement veteran and licensed private investigator who continues that career. But making the transition from being the kick-butt couple next door to the co-stars of a television show took a little bit of adjusting, and they still get surprised on any given day.

“Everything that we do is very unpredictable because there’s no script on this show,” Skip continued. “We’re trying to ambush people that aren’t waiting for us to come. We never really know what we’re going to get. The end result is we look to help these people and get these guys back to justice.”

“When we first started doing stings, we had no idea what was gong to happen,” Alison agreed. “But as time went on and we started seeing more consistency in the reactions, it started to get a little bit more predictable for us.” Yet even with the benefit of two and a half seasons’ experience, there are still moments that are completely unbelievable – like the episode in which she discovered the contractor they were trying to sting was in the hospital.

Fans can expect some good shocks now that Catch A Contractor is returning from its Tut-inspired hiatus tonight. “We have a couple great episodes coming up. Season three has just been phenomenal because we’re doing a different format,” Skip told us, pointing out how each installment is giving more insight into the process. “We have a couple of episodes coming up in particular that you’re not going to want to miss.”

“There were things that we didn’t even expect,” Alison added.

Sometimes, those things come from the mouth of Adam, who provides the comic relief for the show’s very tense situations and then some. “He’s awesome. He’s just so quick and witty and he’s just funny. The guy’s just a super funny guy on and off camera,” enthused Skip, who’s usually right there when Adam comes up with his next one-liner. “He always manages to make it lighter.”

Skip and Alison have to be applauded for how they’ve balanced their own careers, given that being part of a TV show is no small commitment, especially when it films in Southern California and you live in New York. “It’s taking a lot of time,” Skip continued. “We’re out there for a few months at a time during filming. In the course of the year, filming a couple of seasons, we’re probably out filming more than we are at home.”

But even so, his wife still has a full-time law enforcement job and he still does full-time remodeling, and they still pursue a number of hobbies, most notably spending a lot of time on a motorcycle and working on their new podcast. Called Hammer and Nails and hosted by Adam’s Carolla Digital network, it covers everything from Catch A Contractor to hilarious banter about their daily lives. “We just talk about everything,” Alison explained, and it’s that breadth of discussion and healthy dose of humor that makes the podcast a must-listen.

When they do have time to watch TV, they’ll catch their fair share of HGTV and DIY programs, but usually not live. “We do a lot of marathons,” Alison told us, while Skip laughed, “We even have to DVR our show half the time!”

If you’re watching the show, they encourage you to reach out on social media (@Skip_Bedell and @AlisonBedell) if you have any questions, because they’re more than willing to answer them for you. “We’re hoping that people will watch and see what happens when other people make mistakes in the process of hiring a contractor,” Skip told us.

“We’re really proud of our show,” he continued, because just like they’re not your average TV hosts, Catch A Contractor is not your traditional home improvement television. “It’s really so much more than that, because we’re really the only show that’s out there getting justice for people like this.”

Catch A Contractor airs Sundays at 10 PM ET/PT on Spike. You can check out Skip and Alison’s podcast, as well as find out more about everything they’re doing, on their website, SkipAndAlisonBedell.com
Click here to see the article on Examiner.com